SONG X CHANGE is a new live music + Q&A series. Any proceeds raised go towards a charity of the artists choice.

IMPORTANT: Spots are very limited due to the Covid Guidelines for indoor spaces. If you would like to attend please RSVP on Eventbrite to hold your spot. If for someone reason you can not attend then please cancel your registrations.

Ottawa-born singer-songwriter Nambi (formerly known as Rita Carter) has become one of her city’s most darling and well-respected voices. Nambi’s reputation as a sincere and talented performer is a testament to her creative ability and faith in music, as a source of personal and communal revelation. Her strong vocal presence and soulful, acoustic, RnB street folk style, have made her a sought-after and much-admired performer, as evidenced by her appearances in some of Ottawa’s most well-known and loved venues, as well as at House of Paint’s Annual Urban Art Festival in 2014 & 2017 and Megaphono Festival 2019.

Her notoriety and acclaim have also helped to take her soulful music on stages overseas while touring in Europe and East Africa. The 2018 festival season was full of performances at Westfest, RBC Bluesfest, Soul City Music Fest (headliner), and she wrapped up the busy year gracing the NAC’s Fourth Stage in December. With the help of FACTOR Canada, Nambi is currently putting the finishing touches on her third studio album, “All of We”, set to be released this year. On July 24th, 2020, Nambi released her first single in three years called “SHOTANOTHADOWN” highlighting the necessity for speech about police brutality against Black people.

To Nambi music is a weapon, a peace offering, and an expression of deep humanity, humility and strength!

*We have a lot of space at Queen St. Fare to ensure everyone can enjoy the show while maintaining personal space. We are also a fully accessible venue. 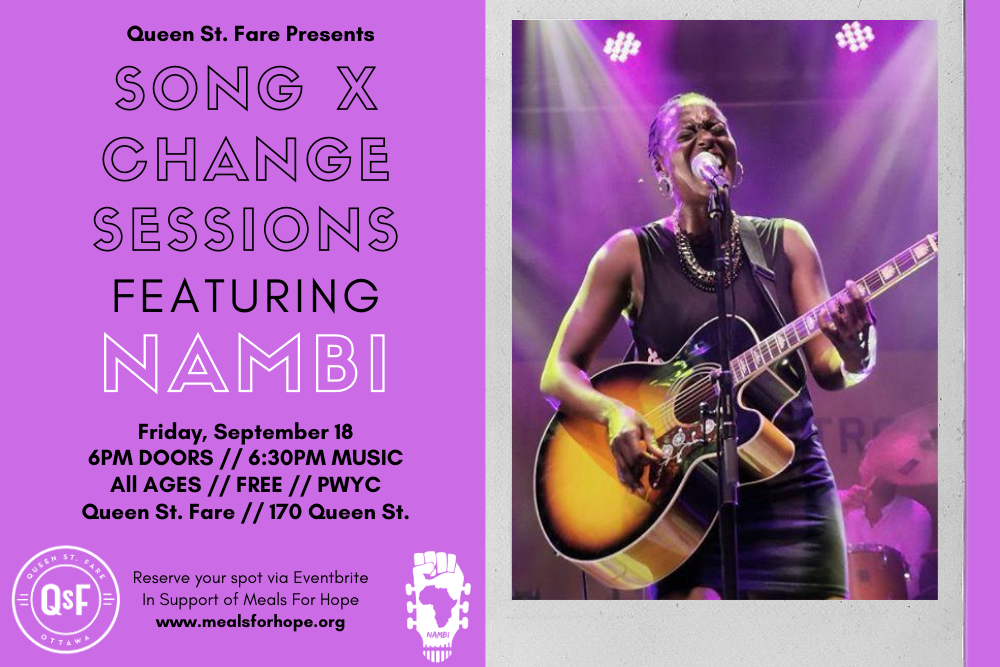 Come for the food

COME FOR THE FOOD

We will have reduced hours during COVID. Vendor hours will vary.

Stay for the drinks & Entertainment

stay FOR THE DRINKS & ENTERTAINMENT

Get in touch with us